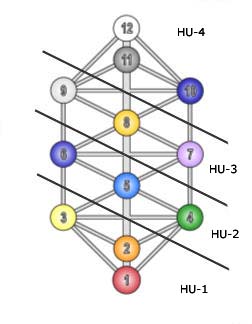 Our entire 15-story building is surrounded by even higher evolutionary environments, much like the actual building is surrounded by its outdoor surroundings. However, this environment no longer creates three-dimensional space-time floors, it only seems to "produce" three primary energy supplies of individual 15-storey universes. These three immortal, intangible, and formless intelligences reside at these levels, they are called in the sources the universal trinity (father, mother - not son and holy spirit) or the YANAS collectives, and above them the YUNASAI's central source.

15-DIMENSIONAL SPACE - the universe understood in this way is not the only one of its kind, but there are again more of these vermires (buildings) in the fractal composition. It is related to concepts such as particle and antiparticle (parallel, yin - yang) universe, time evolutionary cycles, etc. 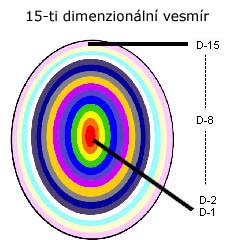 The time matrix (universe), in which we are currently moving with our consciousness - is known in the sources as the UNIVERSAL THINGS UNIVERSE. This one thing universe (which is itself one of several universes) consists of four quadrants, and the above schematic images represent this one quadrant, our current universe, the evolutionary environment of the human race. These four "eggs" are compositionally connected through their three highest dimensions in the form of a cross, and the shared area thus created is known as the so-called INNER ECKA SPACE.

The four universes (two and two) then exist for reasons of the archetypal, dual, circulating cycle of "supply" energy (inhale and exhale), and the two pairs are what are called lower and higher heavens in traditional esoterics.

At the beginning of the construction of our building, there was an agreement regarding its joint and consensual use by its builders - creators. In this phase of events, each of our three primary groups proceeded to create their first children equipped with free will and inhabited the lower, fourth floor of our universe 10 - 12 compartments / dimensions, where the interaction of three of these dimensions creates a habitable three. spatial envinment (x, y, z). All these three founding collectives eventually gave rise to and thus founded other, free-will-equipped collectives, which gradually inhabited the lower floors of our universe and participated in joint operations. 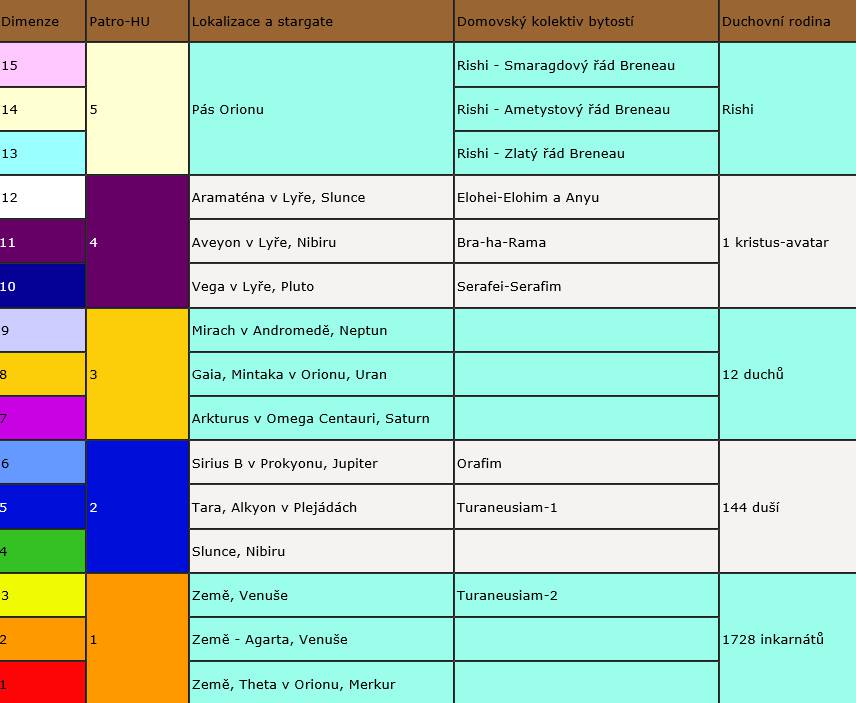 Rebellious groups from the Anyu race of the Emerald Order of Breneau adopted the new name Anna, the fallen angelic legions known as the Anna-Elohim.

Within the individual main founding races, various genetic versions of individual collectives and their correspondence to star systems and planets gradually emerged, which thus became their home places in the evolutionary cycle of this universe. Some arose earlier than others, others with different advantages than others. A combination of, for example, the DNA matrices of the Elohei-Elohim, the Serafei-Serafim, and a small contribution from Bra-ha-rama and previous Azurea guardians - became known as the ORAFIM.

The Orafim later became the parent race of the angelic humanoid, androgynous 12 races of the original genetic line of modern humanity - the so-called master race TURANEUSIAM-1 (T-1). The 12 races that genetically participated (each with its strongest thread) in the creation of this new 13th master angel race, all incarnations of the races of angelic humanity still having their connection to one of these primary angelic sub-races: Bra-ha-man, Dhr -ah-men, Atoni, Trin-i-ten, Azurtan, Celtos, Adami, Yutarans, Luri, Cerrasz, Nezack-tai, Mechizedakz

The human spirit evolves in the environment of 2 parallel universes - in the case of the Earth on a particle Earth and on an antiparticle, parallel Earth.

In each of these environments it develops within the so-called. one planetary time cycle, which contains 6 cycles of Euiago, thus creating space-time for the evolution of 2 x 6 = 12 souls, ie 144 incarnations of one human spirit. The level of consciousness at the level of a Christian avatar then develops (passes through our universe) within the so-called circular cycle, which consists of 12 planetary time cycles and is internally divided into 4 simultaneously running circles of three planetary time cycles. This creates a complete, closed and fully energy-informational interconnected space-time for the entry and exit of Christ consciousness into the 12-dimensional space-time entanglement - our universe / matrix through structured simultaneous incarnation / existence. 1728 incarnations of a single Christ avatar - one spiritual family. Vectors = zero points, zeropoints, stellar SAC activation cycles.

SACs naturally and inextricably take place in a significant energetic event related to the evaluation of the evolutionary work of incarnated fragments of consciousness, ie a kind of evolutionary maturity of incarnates, which we know as evolutionary ascension.

For a better idea of ​​the morphogenetic human race and its connection (correspondence) to the evolutionary, dimensional environment (see figure below), how the universal, 12-element cathara lattice is applied in the structure of the human body.

A rare situation occurs when a biological (three-dimensional) body corresponding to the evolutionary floor is capable of doing so, it can become a direct means of incarnation for the consciousness of not only the incarnate. However, this requires that the biological body, the dimensional carrier for such highly vibrating consciousness, be able to withstand correspondingly higher dimensional energies, which is again related to karma (planetary, racial and personal) and genetic "mutilation" of morphogenetic matrices by opponents, but as well as the very presence of these higher energies in the field of the planet, ie with the assumptions related to the ascending cycles and waves. And, of course, also for the purpose of why this non-standard situation should occur. E.g. Jesus Christ, but not the one crucified, was consciously incarnated from the 12th dimensional level (HU-4)! Now, let's go back to the normal situation where the vast majority of today's biological bodies are hosts of consciousness at the level of incarnates. All of these energetic DNA matrices of all 1728 incarnations of only one Christ are "technically" maintained in an analogous multi-planetary DNA matrix, hence in some entanglement of the morphogenetic planetary fields of all the evolutionary planetary systems involved. We can only get a vague idea of ​​a huge web - MATRIX, of which the morphogenetic field of the planet Tara, the home of the human race, is only one systemic part of this completely intertwined spiritual whole. 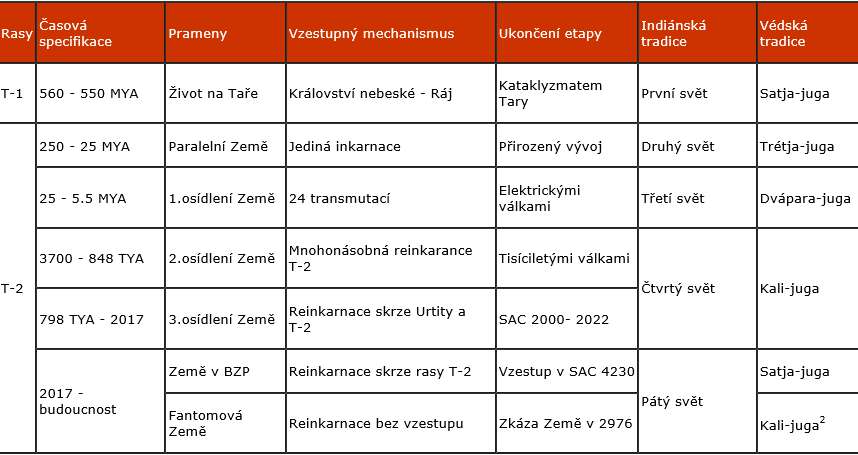 The universe is much larger than expected. Based on data from the Hubble Space Telescope, British astronomers have calculated that there must be at least 2 trillion galaxies in space. However, we cannot observe most of the existing galaxies with current instruments because they are small, faintly glowing, or too far away. Conselice's team came up with a formula that explains how galaxies are divided by size. Monstrously huge galaxies are very rare, while very small galaxies are huge. Medium-sized galaxies are then medium-sized